"Negotiation is a fact of life… Negotiation is a basic means of getting what you want from others..." See full quote below by Roger Fisher, William Ury and Bruce Patton, Getting to Yes, page 70 and 71

Two chefs are fighting over a single orange. They both insist that each of them requires the whole orange. They finally agree to cut the orange in half, so they each get an equal share, and then they go their separate ways. The first chef squeezes out all the juice of his half orange into a sauce he is cooking, but it’s not quite enough. The second chef peels the rind into a cake he is baking, but it’s not quite enough either.

The chefs reached a fair compromise but what would have been a better resolution?

When two or more parties encounter a problem in which they have differing goals and interests, they must enter into negotiation to agree on a resolution that is better than what they can achieve unilaterally. Although their interests are different, they may not necessarily be incompatible.

Negotiation is both a formal process in Alternative Dispute Resolution (ADR) or conflict resolution, and also an informal discussion for parties to reconcile their interests.

[The art and science of negotiation] ... is concerned with situations in which two or more parties recognize that differences of interest and values exist among them and in which they want (or in which one or more are compelled) to seek a compromise agreement through negotiation.

For most people bargaining and negotiation mean the same thing: however, we will be quite distinctive in the way we use the two words. We will use the term bargaining to describe the competitive win-lose situations such as haggling over price that happens at a yard sale, flea market or used car lot; we will use the term negotiation to refer to win-win situations such as those that occur when parties are trying to find a mutually acceptable solution to a complex conflict

Negotiation is a fact of life… Negotiation is a basic means of getting what you want from others. It is a back and forth communication designed to reach an agreement when you and the other side have some interests that are shared and others that are opposed.

Roger Fisher, William Ury and Bruce Patton, Getting to Yes, page 70 and 71.

In the Orange Illustration, the chefs reached a fair compromise but a better resolution would have been if the first chef got all the flesh of the orange, and the second chef got the entire peel. Although the quantity and size of the orange remains the same, the gains would have been greater for both parties.

The primer on negotiation, Getting to Yes, champions the idea of focusing on interests, not positions. A position is a demand put forward or a desired outcome, while an interest is an underlying concern, or desire. In the Orange Illustration, both chefs insisted they needed the entire orange – that was both their respective and irreconcilable positions. Any larger slice of the orange for one chef automatically meant less for the other. This is a typical distributive, or win-lose situation. However, one chef’s interest is to use the orange to make a sauce, while the other chef’s interest is to use the orange to flavour a cake. Unpacking their interests uncovers the need for the juice and the peel rather than as much of the orange as possible. Different, but not incompatible interests. By focusing on interests, rather than positions, they could have expanded the pie, with a win-win result.

Read more about negotiation tactics and strategies on the Mediate2go Blog.

About the Author - Negotiation Defined

Rhema Kang is a litigation lawyer. She graduated with an Honours Bachelor of Arts from the University of Toronto in International Relations, and Juris Doctor from the University of Ottawa. She first became excited about mediation while working for the Honourable George W. Adams, a prominent Canadian mediator who handles legal disputes worth up to several hundred million dollars. Rhema was the researcher behind the book, Mediating Justice: Legal Dispute Negotiations, and won second prize in the FMC Negotiation Competition. Rhema enjoys dark chocolate with sea salt and finds it awkward to write about herself in the third person.

Mediate2go Blogger, Ashton Bult, has compiled a list of the top 10 songs about conflict and songs about conflict resolution in 2014. Read his description and analysis of conflict and conflict resolution in relation to each song. What songs do you think are missing from this list? Be sure to leave a comment at the end of the blog with your opinion. Thanks for reading (and listening)! Also, be sure to check out the Mediate to Go Top 10 tips on how to resolve conflict and Songs about Conflict Management Styles.
1.    ‘Shake It Off’ by Taylor SwiftA song about conflict avoidance, managing anger and moving on.‘Shake It Off’ was one of the top hits of 2014, and an anthem towards conflict. Rather than dealing with the conflict itself however, Taylor tells her listeners to ignore the haters, and just be you.


A song about destructive relationships and confrontation‘Black Widow’ deals with a nasty relationship between the artist and her partner. She is choosing …
Read more 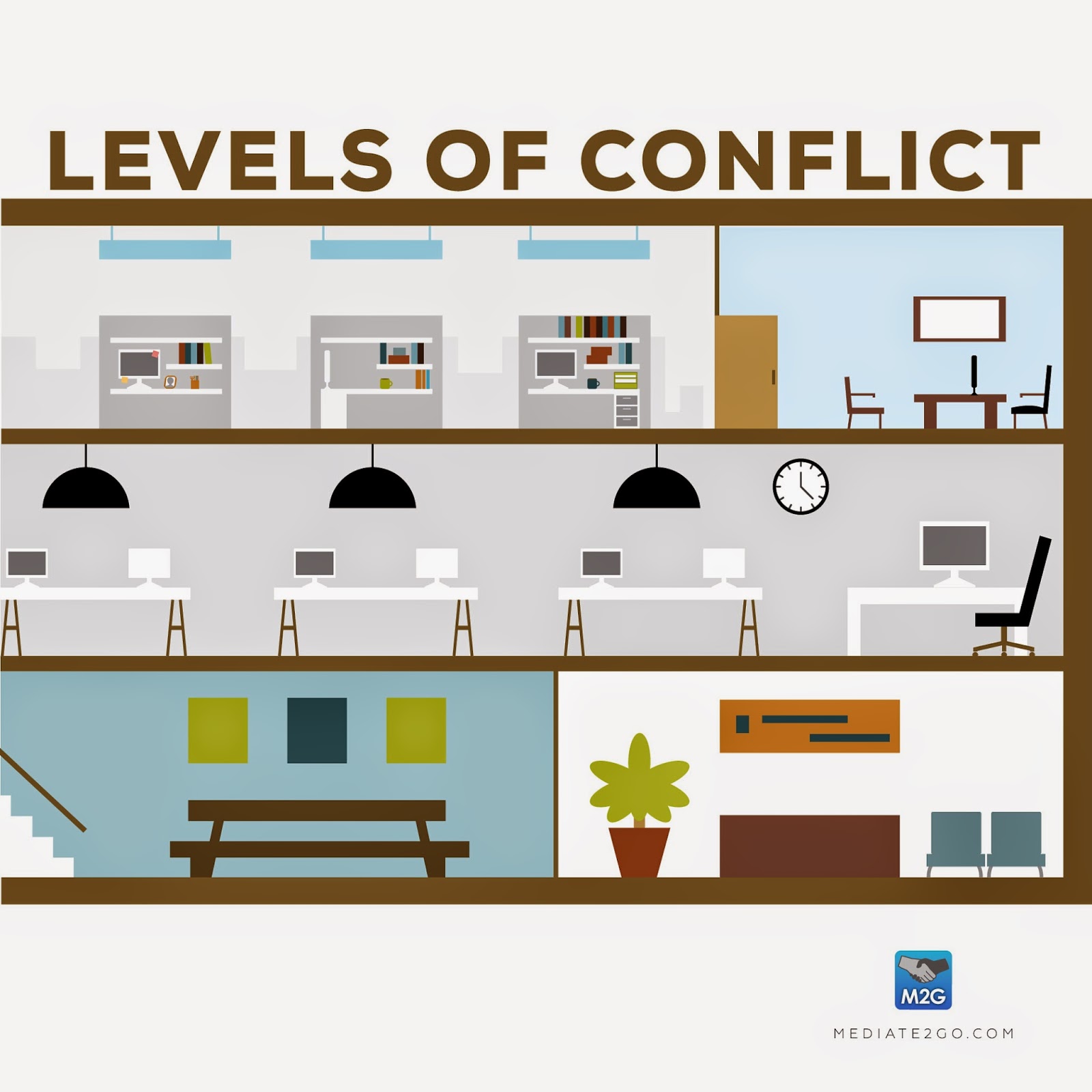 Are you looking to learn more about the stages of conflict?
Introduction to Stages of Conflict
A great source to start to understand conflict, and specifically the stages of conflict, is the article by Louis R. Pondy, entitled Organizational Conflict: Concepts and Models (Administrative Science Quarterly, Vol. 12, No. 2 (Sep., 1967), pp. 296-320). Although the article is from the 1960s, the analysis is still applicable today, whether with respect to a conflict in the workplace, a separation or divorce or an international dispute.
Be sure to see our blog on Levels of Conflict, which compliments the information here about stages of conflict.
Defining conflict
Conflict cannot be simply defined as some of the manifestations of conflict, like anger, stress or even behaviour such as hitting someone. Pondy suggests that conflict is best understood as a dynamic process made of a series of ‘conflict episodes’.