Are you looking to learn more about the stages of conflict?

Introduction to Stages of Conflict

A great source to start to understand conflict, and specifically the stages of conflict, is the article by Louis R. Pondy, entitled Organizational Conflict: Concepts and Models (Administrative Science Quarterly, Vol. 12, No. 2 (Sep., 1967), pp. 296-320). Although the article is from the 1960s, the analysis is still applicable today, whether with respect to a conflict in the workplace, a separation or divorce or an international dispute.

Be sure to see our blog on Levels of Conflict, which compliments the information here about stages of conflict.

Conflict cannot be simply defined as some of the manifestations of conflict, like anger, stress or even behaviour such as hitting someone. Pondy suggests that conflict is best understood as a dynamic process made of a series of ‘conflict episodes’.

Pondy likens the definition of conflict to the definition of decision-making. In decision-making, the individual makes a commitment to a course of action gradually, often with multiple steps along the way. Conflict is no different, but takes place through “gradual escalation to a state of disorder”. He stated that the climax of decision-making is choice, and that the climax of conflict is open aggression. Fortunately, he notes that not every conflict leads to open aggression. This makes sense - think of all of the times that you have had disagreements with someone but they simple end with you saying “let’s agree to disagree”, or you noticed the conditions that could lead to a difficult conflict, and finally things “blow over” and lead to there being no conflict at all. For example, that time that someone took your place in line at the café, but then realized it, apologized, and went to the end of the line. 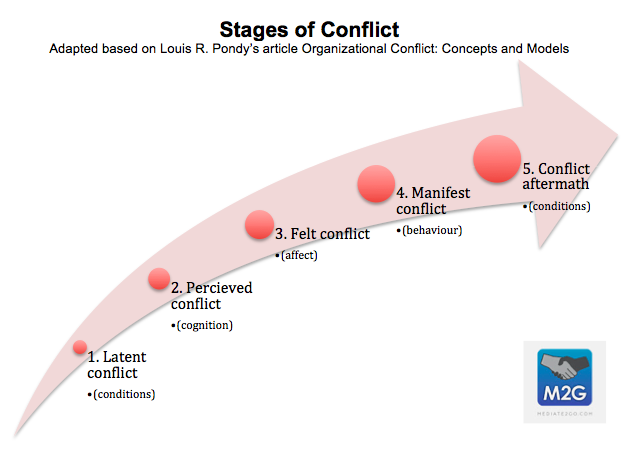 Conflict may exist with or without the perception of those involved. For example, there might be situations where people perceive conflict to exist, but after speaking, they realize that there was indeed no difference in opinions, and in fact, no conflict whatsoever. In this case, the stages of conflict do not proceed. This type of perception issue can be resolved through improved communication. See our blogs on Trust and Communication.

However, conflict may not be perceived or noticed when it actually exists. To become felt conflict, it must be perceived in some way. On the topic of hidden conflict, see our blogs on fearing conflict and conflict avoidance.

This stage of conflict is also known as the personalization of conflict, where conflict that is perceived, ends up having an impact on the person. The American recording artist Monica stated, “Don’t take it personal” - if someone were able to not take a situation personally, then it would mean that even if there were latent and perceived conflict, the conflict would not progress to the “Felt Conflict” stage.

You may have felt this in your personal life, whereby you cognitively understand that there is a conflict between you and someone else, but you simply don’t care. In other words, long hair don't care; an expression which “emphasizes that the speaker isn't affected by what is meant as an insult but actually embraces the accusation”.

This stage is about conflict behaviours, which may be as overt as physical and verbal violence (see when fights goes bad), and as covert as sabotage, apathy or gossip. In order to understand if conflict has manifested, it is important to look at the context of the conflict. His article does however state that conflict is not manifested if one party is not aware that their behaviour frustrates the other person involved. This is where communicating with someone can make a difference in bringing that conflict to the surface, or by accessing the help of a mediator or conflict coach to assist you in addressing the conflict, when dealing with someone who is unaware of the impact of their behaviour, or if they are aware, but are unwilling to collaborate with you (see our blogs on Avoidance and Feeling uncomfortable? Set a Boundary). Although not mentioned in Pondy’s article, it might be useful to do a “perception check”, verifying whether or not your perception of the other person’s behaviour is based on an actual or mere perceived conflict.

If a conflict is resolved based on the interests and needs of all of those involved, then the parties may lay the foundation for a collaborative and healthy relationship (see our blog on when to choose therapy and when to divorce). However, if parties avoid issues, and the conflict is merely suppressed but not resolved, the latent conditions of conflict may be aggravated and explode in more serious form until they are rectified or until the relationship dissolves”. See our blogs on Conflict Escalation and Ending Blame and Defensiveness in Relationships. This reminds us that addressing conflict in a constructive way can lay the groundwork for healthy and happy relationships in the future.

Man must evolve for all human conflict a method which rejects revenge, aggression and retaliation. The foundation of such a method is love.

Conclusion about the Stages of Conflict

The stages of conflict help us look at conflict differently. Conflict is not simply the behaviour that relates to our perceptions of conflict. Conflict involves the context, situation or as we call it here, the conditions that lead to conflict. Conflict then needs to be perceived, and depending on whether we feel impacted by it or not, it then must be felt. Finally, when we are aware that we are impacting the other person, but we continue to act in the same way, there is manifest conflict. The same applies for when someone else is the one perceiving, feeling or acting. The key take-away is that we have a great deal of choice in how we prevent conflict, both before, during and after the conflict, based on the groundwork we lay. There are many stages at which we may intervene in a situation, or change our own reactions in a situation (see our blog on how to be confident - building an emotional air conditioner), to impact whether a conflict goes bad (when fightsgo bad) or whether it is resolved effectively (see top 10 tips to resolve conflict).

Mediate2go Blogger, Ashton Bult, has compiled a list of the top 10 songs about conflict and songs about conflict resolution in 2014. Read his description and analysis of conflict and conflict resolution in relation to each song. What songs do you think are missing from this list? Be sure to leave a comment at the end of the blog with your opinion. Thanks for reading (and listening)! Also, be sure to check out the Mediate to Go Top 10 tips on how to resolve conflict and Songs about Conflict Management Styles . 1.    ‘Shake It Off’ by Taylor Swift A song about conflict avoidance, managing anger and moving on . ‘Shake It Off’ was one of the top hits of 2014, and an anthem towards conflict. Rather than dealing with the conflict itself however, Taylor tells her listeners to ignore the haters, and just be you. 2.    ‘Black Widow’ by Iggy Azales A song about destructive relationships and confrontation ‘Black Widow’ deals with a nasty relationship between the artist and
Read more

Conflict Escalation - Easy steps to manage and resolve your conflicts.